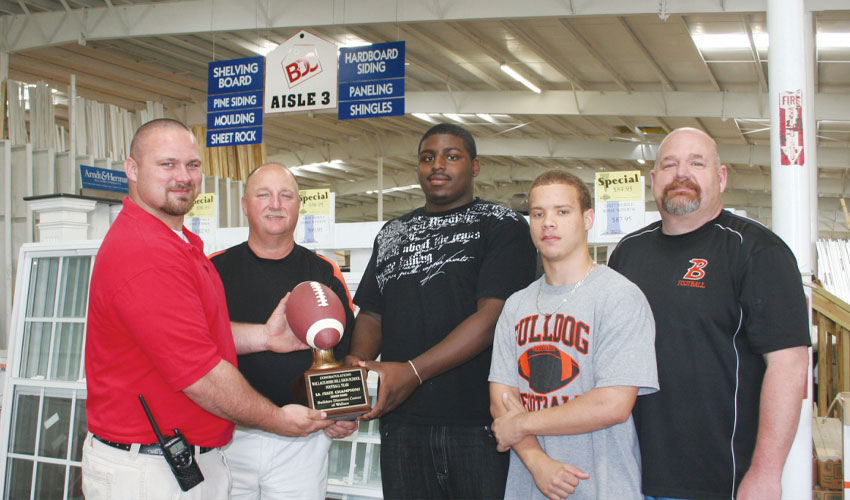 “It is like starting over,” said Rick Jones, manager of Builders Discount for 19 years on Railroad Street, Wallace, who is celebrating that the business is back and 100 percent fully operational.

Jones is referring to the dark day last September 17 when the warehouse was the victim of an arson and suffered 40 percent damage due to the raging fire set in the back of the structure.

His spirit never wavered, nor did the people in the community. “Business is as good as it has ever been — maybe better — and with that gratitude, I want to give back.”

During the re-grand opening last week, Jones presented a trophy to Wallace-Rose Hill football coach Joey Price and his team. Jones congratulated the team on being 1A 2009-2010 state champions. The sizeable trophy brought a smile to the players’ face along with their coach.

Coach Joey Price said, “Don’t let Rick fool you. He is one of the reasons the team went all the way to the championship. He is loved and respected by the players.”

Jones has been the assistant offensive line coach for W-RH since 1992 and has no plans to leave. “Unless they run me off,” he smiled. “I really did not know if Coach Price would want to continue on, but I am glad he saw something in me to allow me to stay and work with these boys. It is very rewarding.”

Jones felt that way about others in the community, like the local volunteer firemen. They sacrificed as well, suffering from equipment damage from the acrid fire. The volunteers never gave it thought and would do it all over again. “They risked their lives to save my business. That says a lot about their character,” said Jones.

Some of the Wallace firemen were there on the site Saturday practicing extricating drills. While the fire was snuffed quickly that day, it was not before it took a toll on the building destroying $460,000 worth of inventory.

When the last detail was finished in February, $1.3 million was spent on the remodel. The roof had to be replaced. The entire back wall of the warehouse also had to be replaced, along with two fork lifts and a sweeper that were destroyed in the fire. Garage doors had to be replaced and the entire showroom was remodeled due to smoke damage. Everything except the asphalt floor received a fresh coat of paint.

The new skylights add much more light in the facility — some joke that on a sunny day you need sunglasses in there.

“The customers have been wonderful and very understanding during these months of remodeling,” said Jones. “They are appreciated.” That is why on Saturday Jones offered hot dogs, chips and soda as a small token of saying “thank you.” Jones has this to say about the W-RH team and his customers, “They didn’t quit on me and I won’t quit on them.”

Interior of Builder’s Discount in Wallace is much brighter now that the business has been totally refurbished after being gutted with a fire by the hands of an arson, who has yet to be apprehended. (Staff photo by Sheila C. Young)